PATIENT SAFETY AT THE SCHOOL OF DENTISTRY

Posted pricing is for internal University of Michigan customers only.

Note: All School of Dentistry users will receive a 20% discount from listed prices. 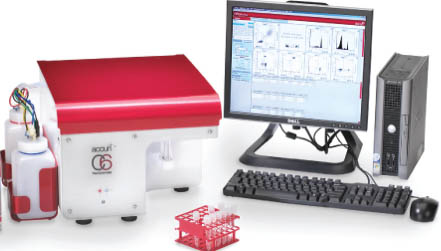 Accuri C6 Flow Cytometers, CFlow® Software and Workstation PC supply aAccuri C6 Flow Cytometerll the capabilities of a full-featured flow cytometer at a fraction of the price of the market leading systems. The C6 system includes blue and red lasers, four color detectors and both forward and side scatter detectors plus software that is so intuitive that you will typically be up and running within an hour.

The C6 fits most your current reagents and protocols. It has a fully digital data collection system, allowing post-collection data analysis.

GeneChip microarrays consist of small DNA fragments, referred as probes, chemically synthesized at specific locations on a coated quartz surface. The precise location where each probe is synthesized is called a feature, and millions of features can be contained on one array. By extracting and labeling nucleic acids from experimental samples, and then hybridizing those prepared samples to the array, the amount of label can be monitored at each feature, enabling a wide range of applications on a whole genome scale including gene- and exon-level expression analysis, novel transcript discovery, genotyping, and resequencing. (Affymetrix Tech-Note)

Investigators study gene expression by measuring the number of RNA copies a gene produces. The gene expression microarray is a tool that indicates how much RNA each gene is making. A typical Afffymetrix gene expression array experiment involves the following steps:

There are only four molecules, or "bases", in every DNA chain: (A), (G), (T), (C). These four molecules partner: C partners with G and T partners with A. Affymetrix DNA arrays use this base pairing attraction hybridization to help researchers identify each SNP genotype.

Quality of the RNA is the single most important determinant of a successful GeneChip analysis assay. Particularly, differential degradation of RNA can lead to erroneous conclusions. We recommend TRIzol reagent for isolation of total RNA from tissue specimens as well as cultured and blood cells. The A260/A280 ratio should be at least 1.6 for pure RNA. The gel profile should exhibit a 28S band that is 2 times more intense thaMicroarrayn 18S ribosomal RNA and no degradation.

The MBCL has Applied Biosystems ViiA7 and 7500 Real-Time PCR System. Both allow real time detection of PCR products. The PCR process thus enables the accurate quantitation of DNA and RNA. The instruments can be used for various applications such as gene expression analysis and allelic discrimination (Single-Nucleic Polymorphism detection).

Real-Time PCR is the most sensitive and reliable method for the detection and quantitation of nucleic acids levels. Reactions are characterized by the point in time during cycling when amplification of a PCR product is first detected rather than the amount of PCR product accumulated after a fixed number of cycles. The higher the starting copy number of the nucleic acid target, the sooner a significant increase in fluorescence is observed.

Relative quantitation can be performed by using standard curve method or the comparative method so called ΔΔCt method.

Single nucleotide polymorphisms (SNPs) are the most common form of mutation in the genome. Allelic Discrimination Assay/SNP Genotyping detects different forms (mutation, insertion, or deletion) of the same gene. In this regard, the 5' nuclease assay (Holland et al.1991) is especially attractive because it combines PCR and detection into one step.

Probes with different reporters are used to discriminate between alleles. The aqMan® MGB probes we recommend have a minor groove binder at the 3´ end of the probe. This minor groove binder increases the Tm of probes, allowing the use of shorter probes. Consequently, the TaqMan® MGB probes exhibit greater differences in Tm values between matched and mismatched probes, which provides more accurate allele discrimination.

The TaqMan® MGB probes contain the following features: a fluorescent reporter at the 5’ end, a nonfluorescent quencher at the 3' end. Because the quencher does not fluoresce, the real-time instruments can measure the reporter dye contributions more precisely. A minor groove binder (MGB) at the 3’ end. The minor groove binder increases the melting temperature (Tm) of probes, allowing the use of shorter probes. It also makes for a more sensitive real-time assay.